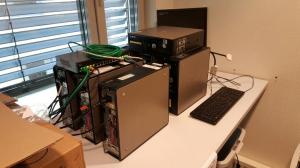 After one month spent on other high priority tasks it was about time to get back to the leap second lab. The fated day is coming and we need to have a strategy in place.

I spent this week running tests, tuning the scripts that support them, and improving the CFEngine policies that manage the lab today and will implement our strategy tomorrow. Besides, I structured my tests a bit better to ensure that the “false start” I had one month ago doesn’t happen again.

On Friday I finally got to run some crucial tests and the results of one of them were scary to say the least.

How does the kernel deal with the leap second?

In its normal mode of operations, ntpd gets a warning from its references that a leap second is coming up to 28 days in advance. When 23 hours or less are left to the leap second insertion, ntpd arms the leap second in the kernel, which means that it will be the kernel, and not ntpd, to take action when the time comes. That considered, the question “how does the Linux kernel handle the leap second?” is a good one to ask first. Stepping the clock back one second when it’s reaching 23:59:60 is what the Linux kernel has done historically, but there are other ways: one is to stop the clock at 23:59:59 and incrementing the time as little as possible whenever the kernel is requested the current time and until the actual time reaches 00:00:00 (see Mills’ The NTP Timescale and Leap Seconds); Google use their “leap smearing” technique; and, of course, one could support it properly by just admitting that a time like 23:59:60 can exist but that’s another story…

I ran this first experiment on one Debian Squeeze machine, one Debian Jessie and two Debian Wheezy:

This experiment confirmed across all the three distributions that Linux implements the leap second insertion by stepping the clock back of one second when it’s close to 23:59:60. So far, so good.

How does ntpd deal with the leap second (if one forces it not to step)?

The previous experiment showed how the Linux kernel handles the leap second. It was now time to look at the other side of the coin. I equipped ntpd on the same four machines with a leap second file, so ntpd knew it was due to insert a leap second, and configured it to refuse to step (using the directive tinker step 0). That alone would have been enough to disable the kernel discipline, anyway I also added a disable kernel directive for good measure. Besides, since I couldn’t use any external reference clock (because today is not June 30th, right?) I configured ntpd to follow the machine’s hardware clock.

Note that understanding the behaviour of ntpd with the kernel discipline disabled is important by itself: in 2012 one of the bugs that caused meltdowns on various sites was a kernel bug: putting the kernel out of the game would rule out any new kernel bugs that may be hanging in the darkest corners of the code.

This is how the test was set up:

The result was again as expected: on all the test machines the clock did not step back: ntpd didn’t take the initiative (despite the fact that it knew about the leap second from the leap second files), nor did the kernel.

How does ntpd deal with the leap second (if one allows it to step)?

There was one more question to be answered. What happens if one allows ntpd to step (no tinker step 0 directive) but still leaves the kernel discipline disabled? Well, here the results were indeed surprising. And scary: the clock misbehaved on all the three distributions. Badly. The clock was stepped more than once and eventually the output of the date command was corrupted, which doesn’t really make for good hopes. But let’s take first things first.

The structure of the experiment was exactly the same as the previous one, the only difference in configuration was that the clock was free to step and the kernel discipline was still disabled. When I looked at the logs of the system time I noticed there was something quite odd: at one point they all were cluttered with non printable characters (0x00). 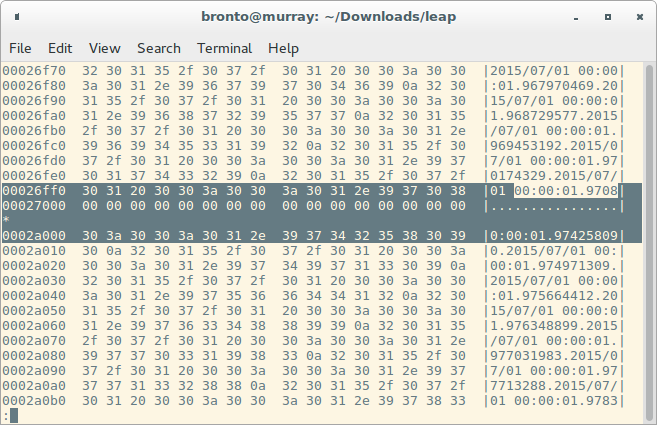 When I cleaned up the output with strings I had the impression that more than one step had happened, but with 9000-15000 lines per log it was better to leave it to a program to scan them. I wrote a very small perl script to parse the log and report about steps backwards. The results were appalling.

The clock steps back a first time right before the leap second insertion, 1 second. Then it reaches midnight+2s and it steps back again, 3 seconds; then one more second back when approaching midnight again. Scary, and it’s not the worst case. Look at what happened in one of the Wheezy nodes:

Four steps. One second before 23:59:60, then about one tenth right before 00:00:02, then three more seconds back, then one more second approaching midnight again.

Jessie was no exception:

What’s to take away from this last experiment? Well, quite a lot actually:

I’ll run more experiments next week, be sure I’ll keep you posted.

One thought on “Scary times at the leap second lab”