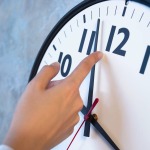 It’s going to happen again: IERS’ Bulletin C was published yesterday announcing that we’ll have a leap second at the end of June this year. It’s time to get ready, but we this time we are luckier than in 2012: leapocalypse’s scars were deep and still hurt, and only inexperienced sysadmins or experienced idiots will deny the need of preparing a strategy to mitigate the unavoidable bugs that will be triggered by the leap second insertion. Or even by the leap second announcement, like it happened in 2012.

Which bugs? Nobody knows. We have six months left during which you could review the source code of your OS’ and software. Or maybe not, but you can at least test what happens on your systems when the leap second is announced and when it is inserted.

Like in 2012, I’ll soon start testing the behavior of both ntpd and Linux. The test framework will be the same as last time, but with the added wisdom gained fighting against leapocalypse. This is what I plan to add to the picture:

Like last time I’ll share my results. If you’ll be doing similar tests in your environment, I’ll be more than glad to see your findings. This is going to affect us all, the more information we share, the more chances we have to overcome the bugs.