I think it's quite ironic that someone considers me an NTP guru. Because I am not. I am just a sysadmin who, once upon a time, had an NTP service to rebuild and wanted to get it right.

What happened then is: instead of doing what a bunch of the sysadmins out there did and still do (use the default configurations of the OS, or trust one of the misleading sources you can find with google), I downloaded the RFC and read most of it. And then, I downloaded the (then) two Sun blueprints about NTP and read them too. Only when I understood how a good architecture ought to be, I started with the design and the implementation.

I must say that I didn't get the architecture right the first time, but at least I learnt what was wrong with it. I kept studying on the subject, doing experiments, and discussing with people who had a much better understanding of the internals (how ntpd really works) and… externals 🙂 (all the electronics engineering theory behind the algorithms used in ntpd). And I ended up building a (hopefully) decent NTP infrastructure for all the employers I worked for.

As you see, I am just a person who tackled a problem more seriously than the average. That was enough to stand out compared to "the mass" and make me look like a guru… not being it!

When Cosimo asked for a photo of mine for his talk at Velocity Europe 2012, and he was going to talk about last July's leapocalypse, I spent one hour with my wife to get some nice photos with the right amount of irony in them. In the end, we selected two photos and sent them to Cosimo.

Of course, Cosimo chose for his presentation the one I liked less, that's why I'm doing justice to my favourite by publishing it here: 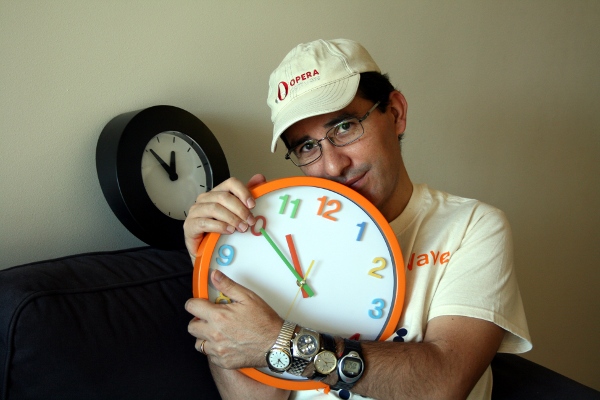 If there is as much irony as clocks in the photos, the goal is achieved 😉